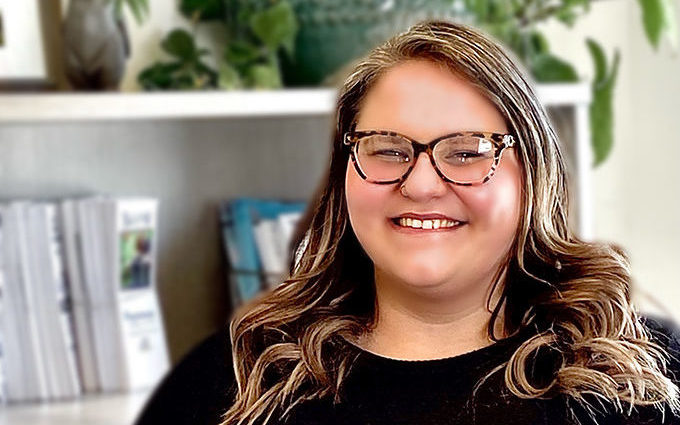 CAPS Senior Director Nicholle Probst didn’t intend on a career working with families. “I wanted to be a police officer. Turns out that I found police work a little boring!” she says with a laugh. While pursuing her degree in criminal justice, Nicholle interned at a county sheriff’s department in rural Indiana. “It felt like we were always waiting for something to happen and then reacting to it.” But one memory stands out from that experience, an incident that changed everything. “We responded to a call at an elementary school – a boy brought in a bag of drugs and said ‘these are my mom’s and I’m taking care of my baby sister.’”

Nicholle recalls that while the mother was being arrested, the Department of Child Services was stepping in on behalf of the little boy and his sister. “DCS staff were the ones helping that family – I saw that and wanted to be a part of it.”  She went back to her college advisor and asked for another internship opportunity at the local DCS office. Her internship turned into a full-time clerical position, assisting case managers and administration – but her goals had changed and she wanted to become a case manager herself.   “It was an opportunity to really help people and connect them to resources that could make a difference in their lives.” The proof of that came full circle when she saw the difference DCS made for the family of the little boy who reported his mom. “That mom got off drugs and was reunited with her kids. That was the kind of difference I wanted to make.”

Nicholle submitted her resume to nearby DCS agencies and Elkhart County was the first to call her back. During her time as a case manager, she became acquainted with the work of CAPS. “I would bring children who had been sexually abused into the Child and Family Advocacy Center at CAPS to be interviewed about what happened to them and I was impressed with the work CAPS staff was doing.”

Nicholle was committed to DCS for the long haul, despite the stresses of the job. In 2018, she was promoted to supervisor and in April of 2021, became director of the local office. She also earned her Master’s degree in Social Work.

While pursuing her degree, she did an employment-based practicum at DCS which allowed her the opportunity to work with CAPS on a project that brought child safety education programming (Monique Burr ) to every public school system in Elkhart County, an amazing accomplishment.

Nicholle says that while she was working on her practicum, her advisor saw her enthusiasm for the work and told her “We’re going to lose you to the prevention side of things”. The prediction turned out to be true as Nicholle joined the CAPS team as a Senior Director in October of 2021.

“CAPS really appealed to me because of the upstream work being done here to strengthen families, instead of helping after bad things have happened to kids.” She’s enthusiastic about working on several new initiatives. “It’s exciting to be on the ground floor of these projects and brainstorm new strategies to meet some of the unaddressed needs of the community.  I also just love the people and the team here and all the expertise and knowledge represented.”